“The largest NASA Hubble Space Telescope image ever assembled.” What more is there to say? This amazing image is a technical tour de force, combining more than 7,000 individual exposures to form a gigantic map of one of the most famous galaxies in the sky. You could literally spend all day panning through the hundreds of millions of stars, each of which might host its own solar system. If this was the only image that Hubble ever produced, I think it’d still be worth it. Be sure to pause the video (spacebar) and zoom in!

Wow blue clouds! So many stars, pink ones - that’s a beautiful nebula!*

The Veil Nebula dazzles with colorful intricacy. A supernova blast competes with denser interstellar gas as it rapidly expands, compressing into a shock. Such a delicate display following such magnificent violence 6000 years earlier in the supernova.

Imaged in 2009, the globular cluster Omega Centauri is one of the first images taken by the WFC3 instrument following SM4 as an Early Release Observation. This is a “snapshot” of a massive globular cluster orbiting the Milky Way, and shows nearly 10 million stars in various stages of their life cycle, as indicated by their color. This is an awe-inspiring image, and demonstrates that the final servicing mission elevated this scientific workhorse to new levels of excellence. The Hubble Space Telescope is an engineering and scientific marvel!

This image of the Galaxy Cluster Abell 2218 is one of the earlier yet most remarkable images captured by Hubble. It demonstrates the phenomenon of ‘gravitational lensing’ predicted by Albert Einstein - the gravitational field of the massive cluster acts as a lens distorting the light from galaxies beyond the cluster, displaying them as stretched ‘rings’ or ‘arcs’ surrounding the cluster. The lensed sources of light wouldn’t otherwise be visible even to the most powerful telescopes. It is not often we come across a stunning visual demonstration of such complex concepts!

The Antennae Galaxies are a beautiful sight - these two galaxies are in the middle of a collision and will continue to merge with one another, resulting in the birth of new stars and eventually one giant galaxy. This image is significant because it represents the future of our galaxy, the Milky Way, and our neighbor galaxy, the Andromeda Galaxy. 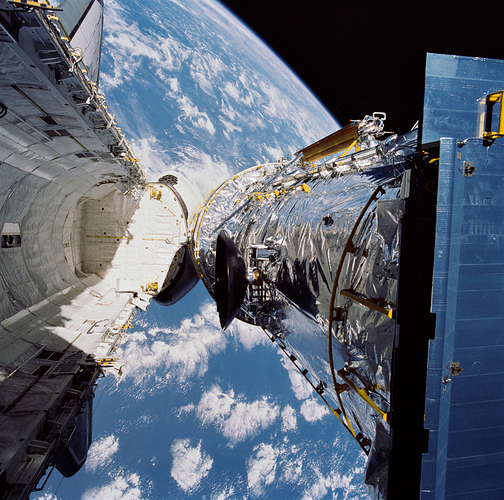 Serving on the Mission Management Team that launched Hubble, my favorite photo was the deployment of Hubble following launch! Follow the link: https://bit.ly/wwt-hst3d to download a 3D model of the Hubble Space Telescope for use in WWT!

Einstein crosses are neat because they were among the predictions of General Relativity made by Albert Einstein in the early 20th century! Images like this and that of the double quasar in 1979 confirm that the effect is real but also that our understanding of the universe isn’t necessarily completely incomplete!

The Ghost Nebula not only looks spookily like a ghost, it also has some rather ephemeral characteristics. Classified as both a reflection and emission nebula, this shimmery wisp in the sky is slowly disappearing from view due to nearby stellar radiation.

Swim through the Cosmic Reef, the 30th anniversary image released by the HST team and our finale to the series! The stark contrast between the beginning and end of stellar life and the intricacy of nebulous tendrils with such bold color make this nebula an instant favorite.

Happy (Belated) 30th Birthday Hubble! Continuing the celebration of the Hubble Space Telescope’s 30th anniversary (April 24th), July will be full of our top 30 Hubble images to explore in WWT, as selected by individuals in the astronomy community, so be sure to check in daily and I will update this post. First up is my favorite: the Triangulum Galaxy (M33). With millions of distinctly visible stars (including hundreds of stellar clusters), the sheer scale and depth of this picture of Triangulum…

Horsehead Nebula in IR Cannot display WorldWide Telescope because your browser does not support iframes. As a planetarian and an astronomer, seeing a nebula like the Horsehead, close up and in dramatic detail, has always been a dream for me. The first time I found it in the sky was a particularly special moment and so seeing Hubble’s IR version literally had me saying “Wow!” out loud in my office the first time I saw the image when it was released. I used it as my computer’s desktop image …