Greetings. I may have found an issue with the orbital velocity of Venus on this website. According to my calculations based on the transit of Venus over the solar disk on 06.06.2012, it is 48.64 kilemters per second, which contradicts the value given on Wikipedia (35.02 kms per sec).

I also have to mention that I have performed the same kind of calculations on the orbital speed of Mercury (the transit over the solar disc on 11.11.2019), and the result checks out alright.

Are you sure about Calculation?
average velocity of Mercury is about 47.36 km/s and for Venus must be less than this although WWT doesn’t show this parameter.

Hello, Babak_Rm. Since forum text format is not suited for displaying formulae, I am attaching an image file where I explain the logic behind the result.

PS The interface is translated into Russian by Google Translate. 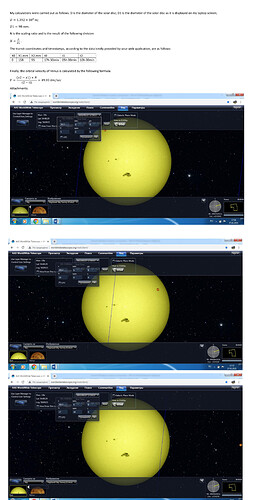 Thank you, as you show Venus moved about 63mm on your screen or 894,857km on Sun surface between x1 and x2
but we know that during transit Venus was at about 43Million km from Earth or 108M.KM from Sun and we need another formula to calculate the distance that it travelled during 5 hours in orbit(if we consider its velocity as 35km/s that distance is about 630,000km)